When I was five years old, the bishop stood over me and said, "Stop babbling about what Father Horne did to you." I kept the secret for 40 years. Today, I babble. - ke

Blogger Kay Ebeling's personal story written in 2006 is at: City of Angels 1
AND continues

At CofA 15 Faster Than Speed of Life

A work in progress

And the story that won't go away by KE

I am working on a real difficult story that I feel I have to write at CofA2 in Sept 29 2011 post. Feedback truly desired. -ke

I Trained to Do this Blog at NASA

Click photo above to read preview of CofA NASA, which we hope to be writing from Houston in 2013

Send them as word docs or jpeg pictures to cityofangelslady@yahoo.com

Reported to IRS as freelance writing income, all legal.

Kay Ebeling
Producing City of Angels Blog, first as coverage of the pedophile priest epidemic in the Catholic Church as one of the survivors, since Jan. 2007

City of Angels Blog will be at http://cityofangels12.blogspot.com

The passion to write about runaway pedophilia in the Catholic Church is a need to "carry this train off the track, swim to the ocean floor, then crash to the other shore."

"I can't carry these sins on my back, don't want to carry anymore."
.
Posted by Kay Ebeling at 9:41 AM No comments:

.
New wording for the Catholic Mass is "biggest scandal over to hit the Catholic Church" in video below from November 29, 2011 Colbert Report on Comedy Central.

Stephen Colbert is youngest of 11 kids in a big Catholic family, or he would make a lot more jokes about pedophile priests, I bet...

Raw Notes? Why that title for CofA 12?

.
The header at the top of City of Angels Blog in 2012 says "Raw Notes" and people may wonder why.

As I wrote this blog for four years, things went real fast. Often I’d begin work on a story, more would happen, and I’d get sidetracked, then never get back to that interview or research. Those notes full of information then languished in my files for as much as four years.

In 2011 I stopped to catch my breath and so had time to look through four years of notes. The results will be posted at CofA12 starting in January

I found in my files hundreds of stories, most with information that has never been published before about the pedophile priest crisis in the Catholic Church. So the Header for City of Angels Blog in 2012 is "Raw Notes" because next year I'm publishing all my unfinished stories from the past four years of doing City of Angels Blog, along with coverage of current events on the issue, with the unique inquisitive perspective CofA readers have come to expect.
.
Posted by Kay Ebeling at 6:07 AM No comments:

Thank you for your piece Child Rape, Penn State and the Catholic Church: Is Religion Especially Bad? on AlterNet.

You perceive what we victims are going through better than most writers, especially with this paragraph:

Catholic priests who were raping children weren't just seen as heroes, or as people with real-world authority and power who could improve or screw up your life. They were seen as the Earthly representatives of a perfect, all-powerful God, which made those victims far more vulnerable to their abuse.


Thanks, Greta, for writing in the 11/22/11 piece what no other news person has stated since the Penn State Sandusky Paterno story broke. The Catholic pedophile priest epidemic was much worse than Penn State, the two are not really even comparable.

I watch the current news repetetion of the day's Penn State news byte and think, why didn't anyone respond like this as thousands of pedophile priest crimes were uncovered in the past 20 years.
.
-kay ebeling
Posted by Kay Ebeling at 3:45 PM No comments:

.
"Those are the ones that are always incredible in bed, the ones who were raised in a convent."

-Kay Ebeling
Posted by Kay Ebeling at 9:05 AM No comments:

Raped in an orphanage himself, priest now imprisoned for pedophilia

.
A lot of priest pedophilia was passed down through generations.

"Prosecutors said Flores' ordination was twice delayed, beginning in 2008 when he alleged he was abused years earlier in the Bolivian orphanage."

Regarding: Rev. Alejandro Flores of Bolivia and Joliet, age 38, serving a four-year prison term in Illinois for criminal sexual assault.

"Flores was sent for treatment at least twice, including three months before his ordination for viewing pornography on a parish computer... images of young males engaged in sex acts... the computer's hard drive had disappeared when [police} sought it months later."

The priest said in 2008 that he was abused years earlier in the Bolivian orphanage...

"At his Sept. 8, 2010, guilty plea, Flores admitted abusing the youngest boy from 2005 to 2010, beginning when the child was 8, usually in his car or the family's St. Charles apartment. He faces deportation to Bolivia upon his release."
*
Posted by Kay Ebeling at 3:39 PM No comments:

Paterno a martyr for the Philadelpia Archdiocese

.
Paterno is a martyr in the true Catholic sense, giving up his career and reputation to help divert attention from the Philadelphia Archdiocese upcoming criminal trials for pedophile priest crimes:

In the current media chaos about Penn State, don't forget there is a criminal trial coming up in March in Philadelphia regarding four Catholic priests and pedophilia, and right now Catholic bishops are likely loving this diversion of our attention to another pedophile predator coverup by a powerful and adored institution.

-kay ebeling
Posted by Kay Ebeling at 5:06 AM No comments:

.
Does anyone else think it's strange timing that the Jerry Sandusky case is breaking now at Penn State just as the criminal trial of four priests is coming up in March or soon after in the same city?
The two news stories concern similar crimes by Penn State coaches and Philadelphia Archdiocese bishops, coverup of child sex abuse for the betterment of the institution.
Now the Penn State story will likely dominate the news while the Philadelphia priest cases go to trial...
I, with my paranoia inclining brain, think Sandusky's case is a convenient way to drown out media and public interest in the Philadelphia Archdiocese cases, which are going through pre-trial motions right now as the coaches are getting torn apart in the media... The Sandusky case even makes the priests look, well, not as bad, to the onlooker. Maybe the Church isn't so guilty, considering Penn State protected a child molester too.

I'm just wondering what conversations went on behind closed doors that may have led to Sandusky's arrest at this moment in time... Anyone have any of their own ideas?

With Sandusky, it was a case of the predator's bosses not reporting the molestation to authorities.

Sandusky ran a non-profit that gave him access to children. He named it "Second Mile" after the reference to Matthew 5:41 "If a man needs you to go a mile, you go two miles."

Wonder if someone in Philadelphia decided to prosecute this case to take attention off the priests.

Just more paranoia from my brain that tends to see plots and schemes everywhere...
Anyone have any thoughts on the Sandusky case, which as you read about it here in one of the gazillion stories in the news today about him, the similarities between the Penn State crimes and the Archdiocese are almost eerie.

If nothing else, did Sandusky develop his inclinations as an altar boy in Philadelphia by any chance?

Penn State Coach Joe Paterno could be a martyr in the true Catholic sense of the word, giving up his career and reputation to help divert attention from upcoming criminal trials regarding the Philadelphia Archdiocese:


Read more about the tight financial connection of Paterno to the Philadelphia Archdiocese at this link: http://www.ajdiocese.org/node/422 and

Don't forget there is a criminal trial coming up in March in Philadelphia regarding four Catholic priests and pedophilia, and the Catholic Church would love a way to divert your attention to another pedophile predator coverup by a powerful and adored institution.
.
Posted by Kay Ebeling at 11:12 AM No comments:

In 2012 CofA Blog will be at City of Angels 12 http://cityofangels12.blogspot.com

.
In 2012 CofA Blog will be at City of Angels 12 http://cityofangels12.blogspot.com/ previews coming at that site soon.
. 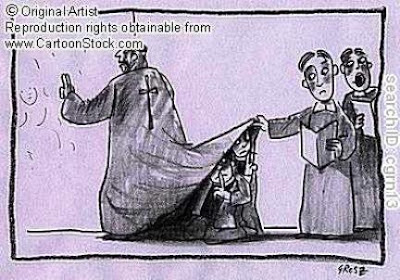 .
I am going through all the notes from 4 years of doing City of Angels Blog and finding gems, many will be posts in 2012.

In process I'm also going through the blog from the beginning in January 2007.

IMAGINE: The true story comes out, including whatever the church is covering up so desperately that they allowed these pedophiles to get at us. Imagine the truth of the total damage to the victims comes out, in spite of the power of PR, pseudo-advocacy, and media control, whatever tactics the church has used, from the start, to shoot down the crime victims and keep the true felonies performed on children from ever being public.

In my notes from last five years are dozens of posts that never got written, need only a few tweaks before publishing. So when City of Angels Blog returns full speed in January 2012, we will publish those gems from 2007 to 2011.